I’m going to start keeping my writing sprints for The Christian Indie Writers’ Podcast here. Join in if you’d like! Take a stab at the prompt then post to TCIW’s social media accounts.

REMINDER – the rules state NO EDITING before sharing, so this is likely rather rough. For example, this week, people’s names change.
Here Goes:

PROMPT: “It was the worst time to get sick…”

Catherine slid her sleeve across her upper lip for the fourth time that afternoon. Mira crinkled her nose and used the end of her pencil to pushed the box of kleenex closer to her partner’s side of the table. A chronic eraser nibbler, she immediately regretted the decision, and made a note to swap this #2 ticonderoga out with a clickable pencil the moment they were back in the classroom.

Which won’t be for another forty-five minutes, she noted, glancing at the white-faced sentry mounted on the wall. Why oh why had she chosen to leave her pencil box behind?

This is all your fault, she thought, glaring afresh at her unsuspecting project partner, who had moved on immediately post nose-swipe, and was busy using a ruler and her own well-chewed pencil to section their poster-board into four equal quadrants.

“ Let’s hold hands on the way to the library,” Mira had suggested at line-up.

“I’ll need to carry my pencil box,” Catherine had protested.

“You don’t need a whole pencil box,” Mira’s eyes, which had always reminded Catherine of Cookie Monsters, big and stalky, white and round as ping pong balls, rolled dramatically, “just a pencil and a ruler, which I have.” She flipped her wrist, making the ruler flap in the air until it wobbled like rubber before Mira’s unsuprised eyes – even a Kindergarten baby knew that trick.

“I really wish I had my pencil box,” Catherine said now, generously offering Mira the chance to apologize.

“Should have brought it,” Mira said, not even looking up from her work.
Catherine was stunned. She did not even know how to respond.
“You were,” she tried. “You said,” she started again.

“Look, Catherine, even I know better than to listen to what I say all of the time.” Mira’s cookie monster ping pong balls were once again set in motion.

“When will you ever learn?” 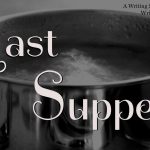 “The first time you hear their screams is always the hardest,” she told me. “Or so I’ve heard. None of mine have ever screamed. But, if it happens to you, don’t let it get to you; it’s just the air releasing from the inside the bugs.” “Quit calling them ‘bugs’, Jenny,” I said. “Or I…